Posted by khauer
in Necessary Forms, Releases and waivers, Uncategorized 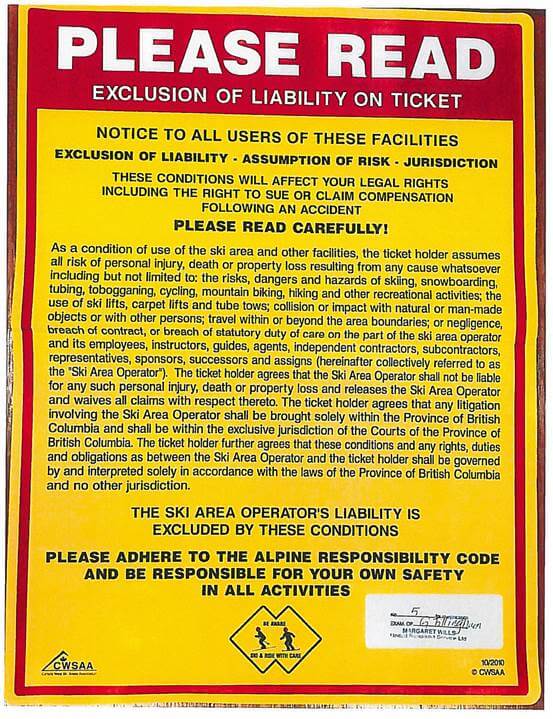 Would the waiver be upheld? That was the question.

In the recent decision of Fillingham v. Big White Ski Resort Limited 2017 BCSC 1702, on March 4, 2013, a snowboarder, the plaintiff, Gary Colin Fillingham, was seriously injured (including a broken leg) after skiing along a trail at the Big White Ski Resort. The ski run had a rope line that often prevented unimpeded access to the short cut, but the snowboarder found the rope line to be open. The snowboarder tried taking the short cut, but recent snow removal by the ski resort resulted in a sheer 10-foot drop down into a parking lot, and the snowboarder was seriously injured

As a condition of use of the ski area and other facilities, the Ticket Holder assumes all risk of personal injury, death or property loss resulting from any cause whatsoever including but not limited to: the risks, dangers and hazards of skiing, snowboarding, tubing, skating, cycling, hiking and all other recreational activities; the use of ski lifts; collision or impact with natural or man-made objects or with skiers, snowboarders or other persons; travel within or beyond the ski area boundaries; or negligence, breach of contract, or breach of statutory duty of care on the part of Big White Ski Resort Ltd. and its directors, officers, employees, instructors, volunteers, agents, independent contractors, subcontractors, representatives, sponsors, successors and assigns (hereinafter collectively referred to as the “Ski Area Operator”). The Ticket Holder agrees that the Ski Area Operator shall not be liable for any such personal injury, death or property loss and releases the Ski Area Operator and waives all claims with respect thereto. …

A large, highly visible wavier notice that contained detailed language substantially identical to the Exclusion was posted at all ticket locations at Big White. The Defendant, BW Limited, sought dismissal of the action on a summary trial, on the basis that the Exclusion or waiver is effective to exclude any liability to Mr. Fillingham, and constituted a complete defence to the allegations of negligence made against BW Limited. The plaintiff argued that BW Limited is unable to rely on the Exclusion because BW Limited itself created an extraordinary and unexpected hazard and such a hazard does not fall within the scope of the Exclusion. Mr. Fillingham sought either: (a) a declaration that the Exclusion is not enforceable; or, in the alternative (b) an order dismissing the summary trial application and directing that the matter of the enforceability of the Exclusion be left for determination at the trial

At Hauer and Co, we assist with Skiing and Snowboard Accidents.