Burial bungled: the case of the tilting coffin

Burial bungled: the case of the tilting coffin 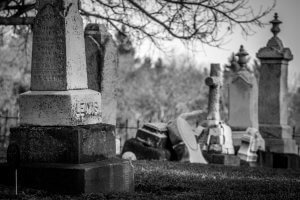 In Kressin v. Memorial Gardens (BC) Ltd. 2004 BCPC 413 (British Columbia Provincial Court), the claimant claimed against the defendant funeral home and cemetery service alleging it breached the contractual arrangements in the following manner: (a) by failing to videotape the service as promised; (b) by mishandling the burial ceremony; and (c) by providing burial plots for the plaintiff and her late husband different from those agreed to. The defendant funeral home and cemetery denied any compensable wrongdoing except  the omission to videotape the service and in that regard submitted that the damages awarded should be minimal, if any.

The funeral service arrangements were made shortly after Mr. Kressin died and were set out in two written agreements separately listing each item or service to be provided with the cost of each such item set adjacent to it. Mrs. Kressin testified that the total price seemed excessive to her but tearfully observed that her husband had, throughout their life together, treated her “like a queen” and so she felt he “deserved the best”.

On the date of the service the defendant breached its agreement to videotape the service because no empty videocassette could be located. As result all of the proceedings, including the speeches, songs, prayers and eulogies went unrecorded.

As the casket was being lowered into the burial plot, one side of the lowering mechanism became jammed, causing the casket to suddenly slip to one side and become quite tilted. Mrs. Kressin screamed out, fearing the casket would open owing to the sudden shift in weight. For the next hour, with the casket dangling in the presence of the assembled friends and relatives watched in suspense as the funeral home staff tried in vain to repair the problem.

Eventually it was determined that the lowering mechanism could not be repaired and that the casket would have to be removed from it and lowered by alternate means. As a result, everyone was sent away with the casket still in the air. Mrs. Kressin was devastated, testifying she felt she had to desert her husband “during his last moments on this earth”.

The funeral home testified that the lowering mechanism is a simple housing containing gears and is serviced once or twice a year. It has been known to fail on occasion without any warning. The court found that knowing that the lowering mechanism would, on occasion, be subject to jamming, the defendant should have taken better steps to ensure that if it ever did cause a problem, it could be remedied in a timely fashion and in a manner that would not unduly interrupt the burial ceremony. In this case the defendant’s response was so untimely that the burial ceremony itself had to be abandoned by those attending to witness it.

Regarding the remaining issue, Mrs. Kressin testified that the burial plot dug for her late husband was not the one chosen by her. The written agreement designated burial plots described as plots 12 and 13.  The claimant said that the plots she selected actually corresponded on the map to plots 14 and 15 rather than plots 12 and 13. She believed that the defendant must have assigned the wrong numbers from the map when writing up the contract. The claimant did not recognize the problem with the plot selection until just before the burial was to take place in the presence of some 79 assembled friends and relatives. At that time the defendant offered to change the plot if desired but Mrs. Kressin declined, testifying she had felt it would be too difficult to do so at such a late stage. She directed that they proceed with the plot that had been prepared for the burial. On the totality of the evidence on this issue, the court was unable to conclude that the claimant was provided with burial plots other than those she specifically selected. Further, even if there was any error in designating the correct plot numbers, the court was unable to conclude that such error lay with the defendant. The evidence in this area was simply not firm enough to allow any reliable conclusion that the wrong plots were provided by the defendant.

Having found breaches relating to the failure to videotape and the interruption of the burial service, the court addressed the appropriate remedies. The court found that the defendant was liable for damages for mental distress. Although the claimant bargained for a burial service package for her late husband and in the end largely received such a service, she was, by virtue of the defendant’s breaches, deprived of much of the peace of mind that she bought and paid for. Rather than relieving the claimant of some of the emotional distress commonly associated with burying a loved one and easing her burden, the defendant by its conduct significantly aggravated it. The delay in the interment meant that Mrs. Kressin was not present to witness the burial. This understandably weighed very heavily upon her and the resulting personal guilt she felt over it was clearly evident at the trial.

Similarly, the failure to perform the video recording of the service was a much more serious breach. Apparently, over the mere unavailability of an empty videocassette, it was unilaterally decided by the defendant that no such recording would be undertaken. No explanation was tendered as to why someone in the employ of the defendant could not be dispatched to any nearby store to purchase a tape, or why Mrs. Kressin was not informed so that she might have made such arrangements. This misconduct was further compounded when Mrs. Kressin went to the funeral home a day or two after the service to collect the videotape. She was informed by a representative of the defendant that they couldn’t locate the tape and that she would have to wait to collect it from Mr. Hedden upon his return. It was only upon his eventual return that she learned, for the first time, that the recording she had waited over 20 days to collect had in fact not been made at all.

In respect of the mental distress occasioned by the delay in interment and failure to videotape the service, the court fixed aggravated damages in the sum of $10,000. The court also awarded punitive damages to the claimant. Punitive damages may be awarded where the conduct of the defendant is of a “harsh, vindictive, reprehensible and malicious nature”. The court found that the defendant’s failure to warn Mrs. Kressin that no videotaping would be conducted, and the manner in which she was ultimately informed, constitutes a very casual, uncaring and disturbing attitude toward the provision of one type of service it purports to offer to its clients. It would not be an exaggeration to describe the uncaring way in which she was treated as harsh and reprehensible. The court fixed the quantum of punitive damages against the defendant in the sum of $2,000.

Sorry, the comment form is closed at this time.